I raised a spam flag on an answer, that doesn't answer the question, but it's tying to sell a product. 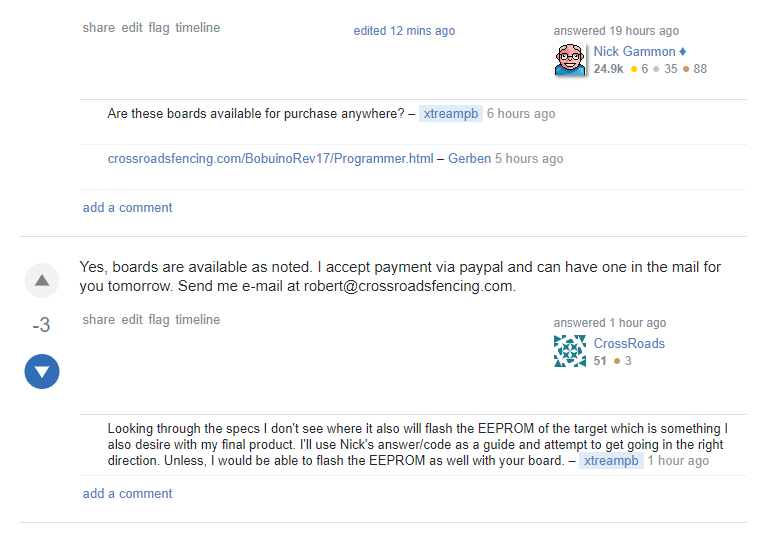 I now realized that the product in question is mentioned in another answer and the author of the flagged answer is the maker if it, trying to reply to OP's comment, inquiring about the product.

The proper flag should probably have been just a NAA, but the mod should have still deleted it as a non-answer.

I assume there was a mistake by a mod, because the message refers to the Gerben's comment linking to the product.

That was my mistake. When I saw the flag I thought it was a flag on the comment, not the answer below. Due to the way the page appeared on my monitor I only saw the comment which mentioned where the product could be bought, and assumed that was what the flag was for.

You are quite right that the answer in question made no attempt to answer the (original) question, so I'll deal with that. :)

(The answer was answering a comment under a question, however I don't think that Crossroads realizes that answers are supposed to answer the main question, not auxilliary questions raised in comments).

I don't think the post is spam, since the author of the post was trying to help someone find a board, mentioned in my answer, so this is hardly spam. You are right, though, to flag as not an answer.

Not the answer you're looking for? Browse other questions tagged discussion flagging .

The Overflow Blog
Featured on Meta

4
Should moderators be censors?
8
Beta progress update (January 2016)
4
It's a shame that we can't “ping” users who have had their questions migrated - do they still get notifications?
5
What if a comment solve the question?
4
2017 Moderator Election Q&A - Questionnaire
3
Flagging: “Not an Answer”, “Very Low Quality” or something else?
3
2019 Moderator Election Q&A - Questionnaire