A rash of minor edits

This is not a question (really), but recently I have seen a rash of 10-20 suggested edits, more or less each day, over the past few weeks or so, where the only change was to remove the "Thanks". Now, don't get me wrong, the "Thanks" shouldn't be there, there is a post on SE Meta about it, and I'll add the link if I have time to find it later. I, myself, have also just made edits where the removal of the "Thanks" was the only edit, but that is because the rest of the post was impeccable.

However, the "Thanks" was not, in 90% of these recent cases, the only thing wrong, and the images without description, spelling mistakes, bad grammar, poorly formatted lists and code formatting had been left as they were and were not corrected.

Initially I had clicked upon "Improve Edit", thus giving the previous editor the +2 rep. However, today I have been rejecting all of them, apart from one, as it just seems that lazy editing should not be rewarded.

I have some screen shots as example, but I do not wish to publicly name and shame, and so I will also not name the editor in question - it was the same person in each and every case.

So, I guess that there is a question after all... am I right, or just being a grumpy s*d?

I had paused the review of these edits for a moment or two, and by the time that I came back, I noticed that the remaining 4 or 5 had been approved anyway, again with just the "Thanks" having been removed, leaving behind glaring spelling, grammar and capitalisation mistakes, as well as one of the images not even displaying correctly (the markup was missing the preceeding "!" - note the text "TFT Front Image"). Here is a screenshot of the top of the post: 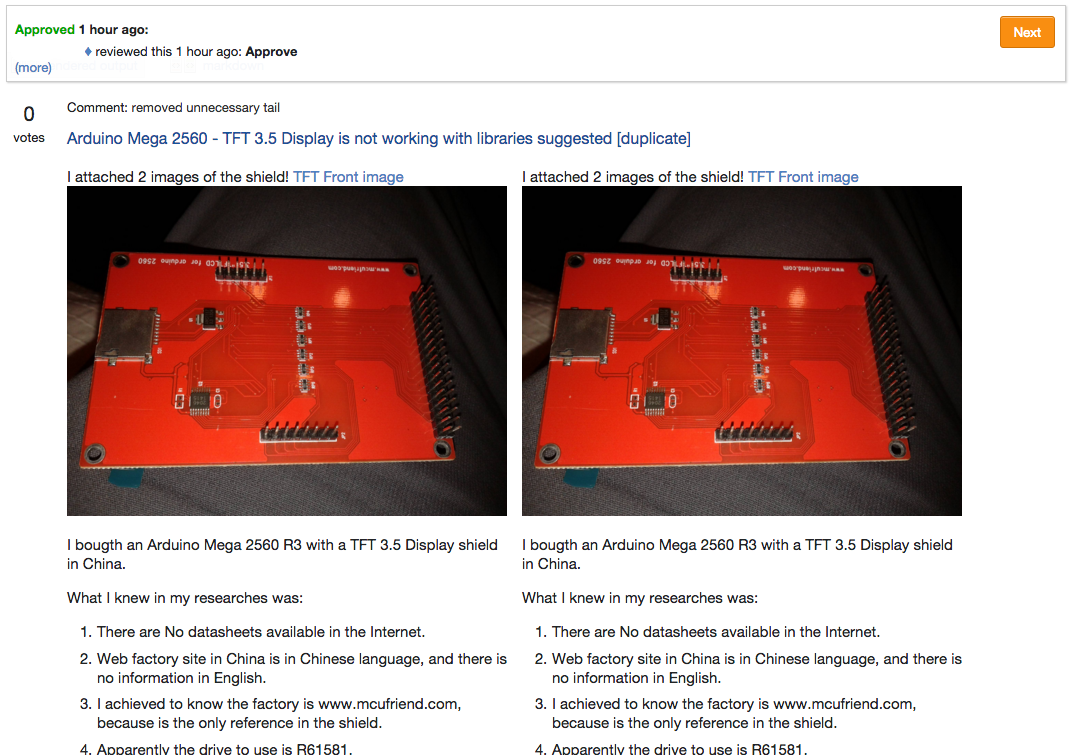 I do not want to sound like a nitpicker, but could we all try to be a bit more diligent in both edits and approvals, as awarding +2 points for lazy edits will only encourage more sloppy editing.

I may be kidding myself here, but I like to think that if people see that their post has been fully edited, that they understand why, take those edits onboard and, hopefully, in their future posts, they then can craft a better, more stylistic (and hopefully easier to read) question or answer (without the "Thanks", typos, spelling mistakes, lack of capitalisation, omission of image descriptions, poor list formatting, question titles written in title case, lack of of code formatting (including the use of the <--language: C --> tag), bad grammar and what have you), or maybe, I have just been working in the field of documentation for too long...

There's a rejection reason called "no improvement whatsoever" that applies here. That edit didn't do anything to make the question easier to read or understand, and goodness knows it could've used some of that.

Some folks get all bent out of shape about "thanks" at the end of questions, but I've yet to hear an argument for a simple "thanks" making a question objectively worse; it's at the bottom of the post, it's one word, it doesn't really chew up space and may even make the post seem a bit less demanding. It's not like you're posting a full-on signature that pushes the answers down the page and requires time for readers to parse; it's one word in closing, one superfluous word among many.

And yes... "Thanks" is mostly superfluous and if you're in there editing for other reasons it's probably worth getting rid of... But removing "thanks" while leaving a dozen embarrassing language and formatting errors is kinda just insulting to everyone else who has to read the post, not to mention the author whose post is modified without any appreciable improvement.

These are nuisance edits; please do reject them.

I didn't respond when I first saw this because I wasn't (and still am not) sure. It appears there is nothing wrong with removing these "thanks!" lines, so don't worry about that part.

I asked other moderators, and it seems that all accepted edits award +2 rep, so a "simple" edit does not "steal" rep from a more complex edit.

I must admit there have been times when I edited egregious problems out, without checking for more subtle ones, for example:

However if you have time I think it helps to look more deeply and see if you can spot other things. For one thing, new posts by new users enter the review queue. If you just remove something simple like "Thanks" then that post leaves the review queue, and other problems might be missed. If you don't have time to check in more detail, perhaps postpone editing until you do have.

The bottom line is, the site looks better if we have good questions and good answers. Anything our more experienced users can do to help both of those causes will help improve the reputation of the site as a whole, thereby encouraging more people to visit it.

Not the answer you're looking for? Browse other questions tagged discussion editing .

-4
How to fix this warning?

4
Should moderators be censors?
8
Project Showcase '14: Detailed Information
0
A questionable rejected edit
9
Stepping down as provisional moderator
3
Rejected edit results in loss of constructive code modification
2
What to do with low quality posts?
3
Flagging: "Not an Answer", "Very Low Quality" or something else?
4
Formatting and indenting (but not fixing) code in question