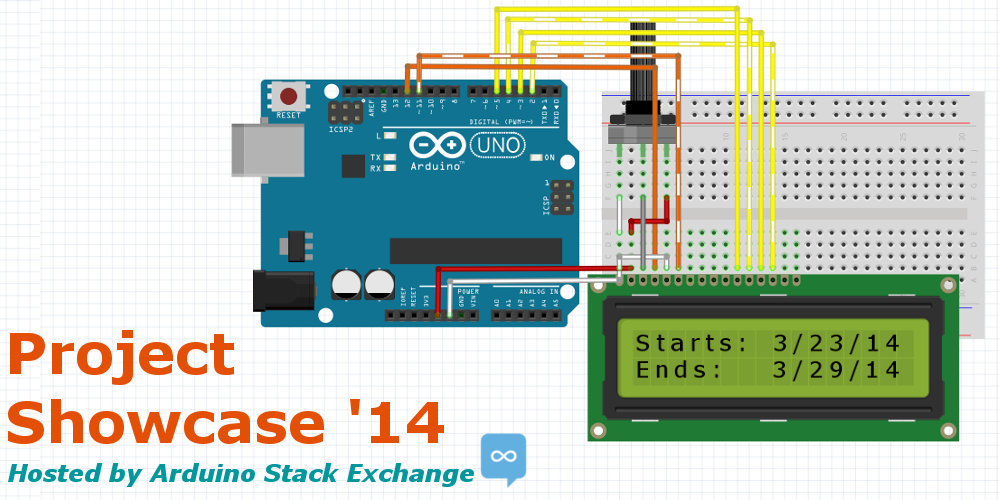 Its been a month since launch and we have had a fair bit of Q&A. We have solved a fair number of problems, and now, its time to see where that has gotten you and us! To celebrate 10 years of Arduino, we are proud to announce the first event ever on Arduino Stack Exchange.

The logo is a derivative of the Arduino Community Logo licensed under Creative Commons license CC-SA-BY-NC 3.0

Get your boards and soldering equipment out, dig out the ICs and resistors. The first Arduino Stack Exchange contest is just round the corner. We will be looking for interesting projects that are built using Arduinos. The contest is aimed towards sharing, discussing and providing feedback on projects that you and other members are working on. There may be a surprise in store as well for the best* submission. To make it a huge success, we need your help! Spread the word, tell your friends and colleagues. The more people that participate, the more fun its going to be! Keep an eye on this post. More details coming soon.

The rest of the details will be posted on the 23rd in a post on main.

The logo is a derivative of the Arduino Community Logo licensed under Creative Commons license CC-SA-BY-NC 3.0

The Overflow Blog
Featured on Meta

8
Project Showcase '14: Detailed Information
7
What should we do for Arduino Day 2014?